Take the first steps into the fun world of Tunisian Crochet with our free How-To Guide.

Also known as Afghan, Tricot, Railway and 'Crochet knit', Tunisian Crochet has had a long history of names. The 1882 Dictionary of Needlework lists several additional names for this stitch, two that stand out the most are "Fool's stitch" and "Idiot stitch".

Tunisian Crochet is easy to learn and as it works up quicker than regular crochet (and is roughly twice as fast as knitting!) it's great for beginners.

While the finished fabric is dense, textured and can appear knitted or woven, it has less stretch and is considerably thicker than a knitted piece would be, making it ideal for crochet garments and winter pieces.

Tunisian Crochet uses a long hook, usually with a stopper on one end and occasionally double-ended (perfect for working Tunisian in the round).

With Tunisian crochet you don't turn your work, the front (RS) is always facing you. Instead, you work the stitches on and off the hook with the "Forward" and "Return" passes. During the forward pass the stitches remain on the shaft of your hook (much like knitting) and the return pass works them back off again. Think of it as zig-zagging back and forth across your piece.

As with any new skill, practice makes perfect! Tunisian Crochet begins with a foundation chain.

Begin by making a chain of at least 10 stitches (if you're working from a pattern they'll specify how many chains you need, if you're just practicing we recommend you start small, around 10 is perfect).

Remember: Each row in Tunisian crochet is a two-step process. 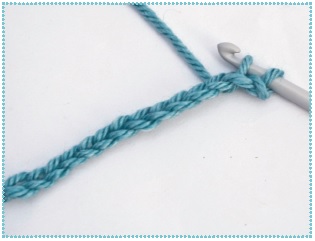 Next we move on to the "Forward Pass" for the foundation row. This involves pulling up a loop in each chain while keeping all of the loops on your hook. Simply insert the hook into the second chain from the hook, yarn over then pull the loop through the chain. Continue pulling a loop through each chain and collecting them on your hook. 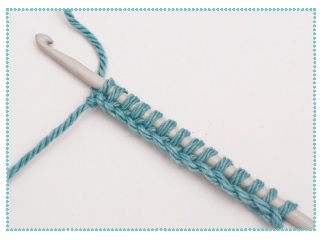 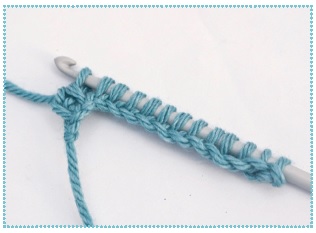 Continue in this way (yarn over and pull through two loops) until only one loop remains on the hook.

Congratulations! You have now completed your first forward and return pass.

Tell us your thoughts below.

Want to leave a comment on this tutorial? Please login below, or register.

Show your support for Inside Crochet Magazine by adding a button to your website. Simple copy and paste the HTML code below onto your website:

Join our newsletter to keep up-to-date with Inside Crochet and receive exclusive content – straight to your inbox!

Read Inside Crochet magazine on the go anywhere in the world with our digital downloads. Available now for iPhone, iPad, Kindle, Blackberry, Windows 8 & Surface!
Download now →